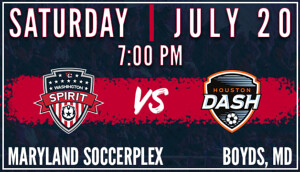 The World Cup is over, but soccer still exists in DC!

By now you’ve learned that World Cup hero Rose Lavelle, on the US National team, ALSO plays for your Washington Spirit. And you have it in your power to watch your hometown NSWL team play in person.

Let’s put our excitement and calls for equal pay between Men’s and Women’s soccer teams to actionable use, and give the Spirit a boost.

So far in 2019, the National Women’s Soccer League (NWSL) Spirit are in 4th place with 18 points. They haven’t finished strong in the last couple seasons, but did finish 2nd in 2018, losing on penalty kicks in the Championship game.*

The Spirit typically play at the Maryland SoccerPlex, but they will play TWO games this season at Audi Field, on August 24 (vs. Orlando) and September 14 (vs. Reign FC). That is pretty cool. Not that you shouldn’t also take in a game or two in Maryland.

Get your tickets to the July 20th match here.

And get your tickets to the Audi Field games here.