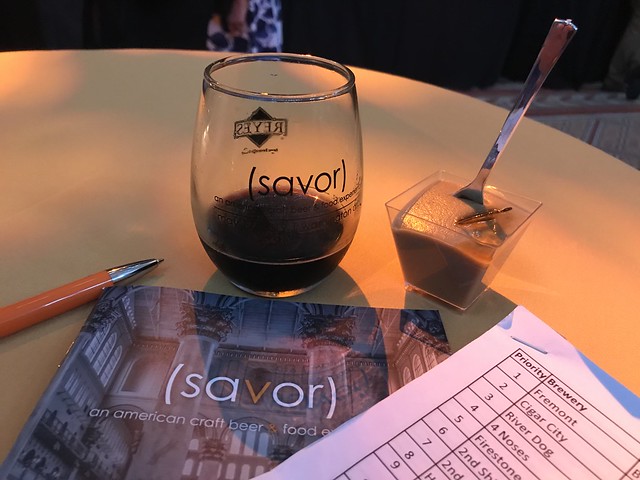 What did we love about SAVOR?

The 12th annual SAVOR: An American Craft Beer & Food Experience, came through the National Building Museum like a whirlwind on May 17th, and we had a another fine time noshing the food pairings, while sipping on the many brilliant beers.

2019’s edition was only one night (typically SAVOR is held over two nights), but the event did sell out, and the museum was packed at its peak. There have been rumors this may have been the last SAVOR, but there are many reasons why this would be a bad thing. For me the experience is always enjoyable, but the chance to explore, in a single setting, the wide variety of breweries representing the U.S. is a huge draw (over 7,000 and climbing). It also brings actual brewers to DC, to advocate with and support the Brewers Association’s efforts to lobby the government for better beer practices and regulations that will benefit our small and independent breweries. Lastly, it’s a showcase to bring out-of-market beer to local DC bars, restaurants and bottle shops. Nice.

So, to be clear, still in favor of SAVOR.

Each of the 92 breweries poured 2-3 beers, paired with culinary delights crafted by chef Adam Dulye (executive chef for the Brewers Association and CraftBeer.com).

Food was nowhere to be found in the first 20 minutes or so, but that’s not really why I come to SAVOR (though was definitely ready to eat). Towards the end of the event, the Corn Madeleine/Chicken Liver Mousse was all that could be found…I ate multiple, not going to lie, and although not my favorite item from the tasting menu, it didn’t deserve the disdain it seemed to illicit (by being the only thing left).

Many people had Fremont Brewery (Seattle), returning from last year, high on their list of beers to sample, and indeed a line formed right away. One women in line indicated that her strategy was to not know too much, but to simply follow the lines. Roll with what works.

I managed to sample 29 beers, in many styles. I went pretty heavy on the high ABV beers early on, so toned the quantity down mid-way through. I also went heavy on the porters and stouts, as anyone that knows me can attest, those are my favorite styles and I was quite pleased with what the breweries brought to SAVOR.

Here I list the stand-out beers and some of the food pairings:

B-Bomb Coconut Edition (Wood and Barrel-Aged Strong, 13% ABV) by Fremont Brewing (WA) (Untappd Rating: 4.44; My Rating: 4.50) – Just a delightful beer, strong but easy to drink with a smooth finish. The second beer I tried, and #1 on the SAVOR must-list put together by our other beer writer, Jeff.

Across the Alley (Russian Imperial Stout, 14.3% ABV) by Cigar City Brewery (FL) (Untappd Rating: 4.44; My Rating: 4.50) – Also very high on the list of top beers to try, and it was easy to see why, you could flat out taste the warm, tingly strength coursing through you. Not for light beer enthusiasts, but I’ll drink this all day (maybe not quite that long).

Thicket as Thieves (Wood and Barrel-Aged Sour, 6% ABV) by Wooden Robot Brewery (NC) (Untappd Rating: 4.16; My Rating: 4.25) – I had the chance to visit Wooden Robot in Charlotte last year, and came away impressed by all the beers I tried. This one is no exception.

Raspberry Beret (Sour Ale: Fruited American, 5.7% ABV) by Upland Brewing Co. (IN) (Untappd Rating: New; My Rating: 4.25) – Like drinking the sweet sugary juice of youth. Not tart at all, very easy to drink.

Oaxaca Choca (Mexican Chocolate Stout, 10.7% ABV) by New Realm Brewing Co. (GA) (Untappd Rating: 4.12; My Rating: 4.25) – Wow, this is spicy and thickly delicious. With the rice pudding and churro, with horchata on top, this was definitively the best food pairing.

Siberian Silk (Porter: Baltic, 5% ABV) by La Cumbre Brewing Company (NM) (Untappd Rating: 3.94; My Rating: 4.25) – This is my favorite name for a beer from SAVOR, it absolutely has a silky finish (no pun intended). Paired with the rabbit tamale with black mole, which was one of the best dishes chef Adam and his kitchen put together.

Whirlpool (Pale Ale: American, 4.5% ABV) by Night Shift Brewing (MA) (Untappd Rating: 3.9; My Rating: 4.00) – A hazy, citrusy pale and probably the lowest ABV beer I tried on the night, but boy did I need it after so many strong beers. It paired nicely with the shrimp & grits, and was quite tasty.

Twisted Strawberry Fest (Fruit Beer: American, 5% ABV) by Tampa Bay Brewing Co. (FL) (Untappd Rating: 3.55; My Rating: 4.00) – I like the contrast of dark beers and some of these flavorful berry flavors (hey, strawberries are delicious with chocolate).

Swords and Whiskey (Wood and Barrel-Aged Strong Stout, 10.3% ABV) by Old Stove Brewing Co. (WA) (Untappd Rating: 4.04; My Rating: 4.00) – You can’t go wrong with a name like that. I really went to town on the barrel-aged strong stouts, and strong is the correct word. I made sure this was on my list, since it’s also from my home state of Washington. Very good, I’ll need to check out this brewery next time I visit.

On the way out, our commemorative beer was The Lost Abbey‘s SAVOR SIN (American Wild Ale w/blood oranges and guave). Can’t wait to try it. 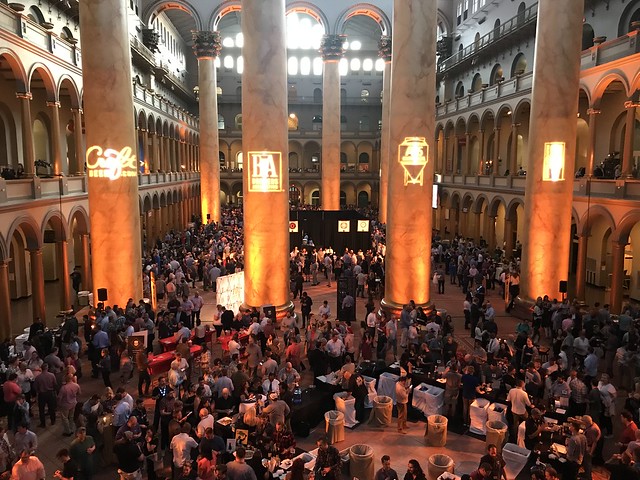 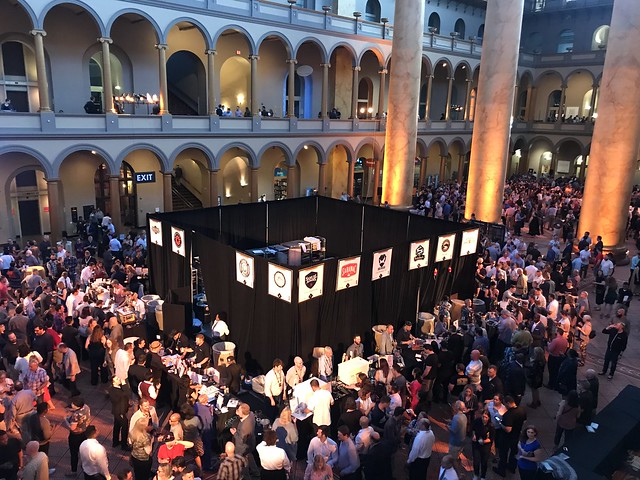 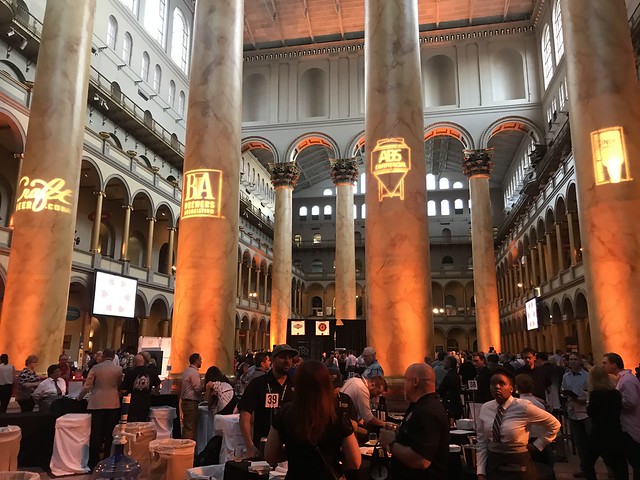 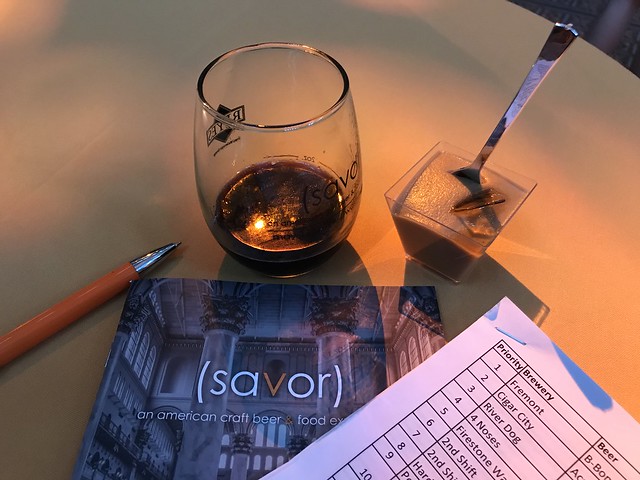 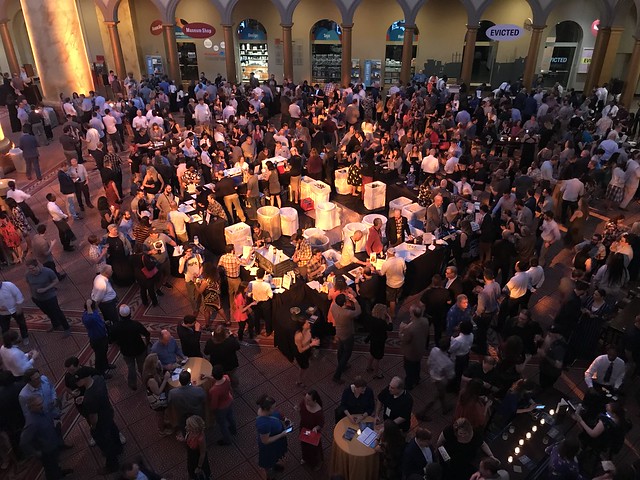