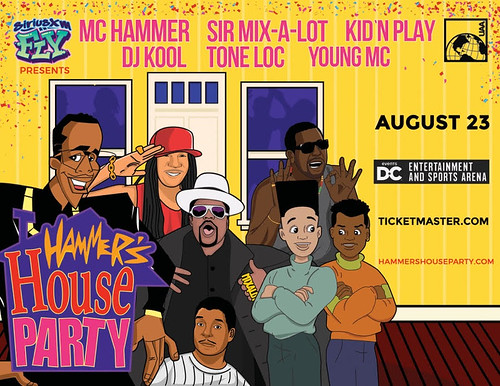 MC Hammer is in the house!

Yes indeed, MC Hammer is now performing and he’s on tour making his way to DC with a bunch of friends. You will need to be there.

On Friday, August 23rd, witness an epic R&B and Hip-Hop show with tons of nostalgia. MC Hammer’s Hammer House Party, presented by SiriusXM Fly, will take place at the fairly new Entertainment and Sports Arena in the SE quadrant.

Some of the friends that will be joining Hammer at his party include, Sir Mix-A-Lot, Kid ‘N Play, Tone Loc and DJ Kool. Basically, the late 1980’s and early 90’s Hip-Hop scene has come back in full force! I’m personally stoked to see Sir Mix-A-Lot live.

I’m already humming ‘Wild Thing’, “Baby’s Got Back’ and “Pumps and a Bump”, and hopefully it has a hold of you as well. Hammer pants optional.

This is both an excellent idea musically, and a good opportunity to check out the new venue down in Congress Heights.

Get your 2 legit 2 quit tickets here.

Tickets start at $50. House Party starts at the Entertainment and Sports Area at 8pm.