The number of people that expressed their love for Gregory Alan Isakov was astounding, and many didn’t hold back from the public displays of affection.

Gregory Alan Isakov crooned soothingly for the sold out 9:30 Club on Sunday, November 11th, with the grace of wistful folk music, and a rainbow of spotlights overpowering the dark stage to illuminate his Americana-ready band, teeming with strings (violin, cello, banjo and guitar).

One ‘gentleman’, near the front, repeatedly shouted/slurred ‘I love you, Gregory!’, initially amusing but later we realized maybe he was on to something. Another said, ‘I just love his music.’ It’s hard to capture the mood that the 9:30 Club’s subdued darkness, the lilting melodies, and Gregory’s honey raspy voice elicited in each of us, but rarely in my concert going days have I seen so many couples making out. Towards the end of the main set, Gregory thanked this seemingly non-stop loving crowd for being so quiet, remarking its not the typical concert approach.

Gregory is touring for his newest album released in October, Evening Machines, which debuted at #1 on Billboard’s Americana/Folk Albums chart. Born in South Africa, his family moved to Philadelphia when he was young, where he started his music career. Later, he relocated to Colorado, where he found his entire 5-piece backing band.

Gregory started the 16-song evening with “She Always Takes It Black”, and later sang “Chemicals”, so the addictive nature of coffee perked up a few times. Addiction (and coffee) drives us and gets us through the tough times.

He performed six songs from Evening Machines, all consecutively in the middle of the set. “Dark, Dark, Dark”, among my favorite songs he played that evening, regaled us with images of $5 wine, below the half-moon, with a woman as fleeting as smoke and as addictive as nicotine. The melody from the strings, drawn out slowly, brought a sense of melancholy. Contrasting is “Caves”, one of his recent singles, that’s uptempo and implores us to ‘put all these words away’ and just love and be free.

His inspiration for many of the album’s songs came while cutting out sentences and words from trashy romance novels and spreading them out and moving them around like refrigerator magnet poems. He had to whittle his options down for the album however, as his efforts had led to an incredibly exorbitant 40 songs.

He ended the main set with “Liars”, a nostalgic and quiet song originally recorded with the Colorado Sympathy, that later soars in the embrace of the stringed instruments.

Gregory and band came back for an acoustic encore, starting with “Time Will Tell”, where they all circled together, lights shining down affecting a halo. Then they ended with the more lively and twangy “All Shades of Blue”, that speaks to sadness, ‘when the wine stops working and you’re all run out, and all of your high hopes have all headed south’ but don’t worry, it continues, ‘Make a wish anyway, just your smile lit a sixty-watt bulb in my house.’

We were a little blue when it ended, but smiling after witnessing Gregory’s performance, where the love was so pervasive, it probably followed some in the crowd home (presumably).

Encore
Time Will Tell
All Shades of Blue 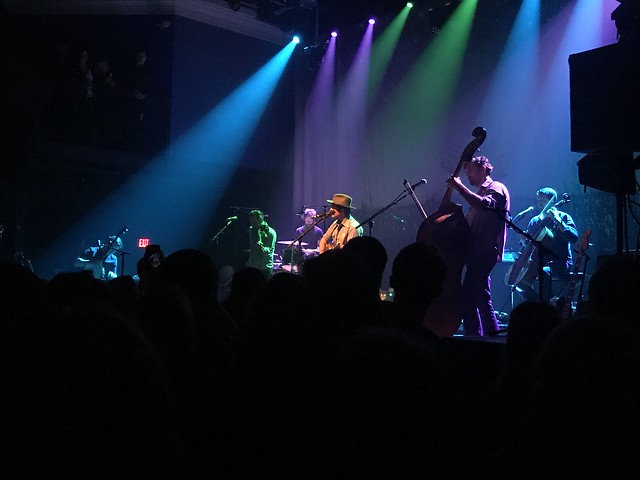