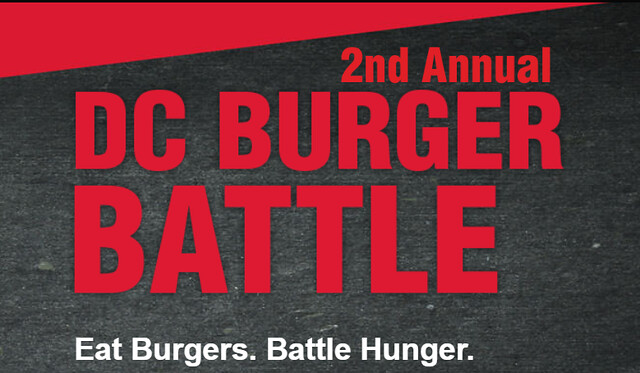 Burgers and battles, for a good cause, all you need on a Thursday.

The second annual DC Burger Battle comes to the lawn of the National Building Museum (at Hill Country’s Backyard BBQ) on August 23rd!

Why do this event? First, $30 is a pretty sweet deal considering that it also includes all the beer you can drink, when compared to other similar food events in DC. They will have Goose Island IPA, but you’re attending because the burgers. (Note: If you want good beer, you have plenty of events coming for DC Beer Week, plus you can go to Snallygaster in October.)

Just the thought of tasting a dozen different styles of burgers is good enough! 2017’s winner was b DC Penn Quarter.

Who will unseat them this year? The competitor’s are:
Due South
Hill Country Barbecue
Rebellion
Stoney’s on L
Blackfinn
Hard Rock Cafe
b DC Penn Quarter
Bullfeathers
Capital Burger
Sign of the Whale
Penn Commons

Second, they’ll have live music, including Trailer Grass Orschestra and one of your local favorite bands returning this year, Justin Trawick and The Common Good.

Lastly, proceeds go to support SOME (So Others May Eat), a local community-based organization that helps the poor and homeless with food, clothing and health care.