Have you visited the Healing Totem Poles in the Congressional Cemetery?

If not, you should visit more often.

To honor the victims of 9/11, between 2002-2004 the Lummi Nation, working with other Native American tribes, created four totem poles and a crossbar as a way to symbolize healing for the people suffering from the experience.

Of those four totem poles, two are found in DC along with the crossbar, all which sit majestically in the Congressional Cemetery today. They were originally at the Pentagon to honor those that died in that attack. The third is in New York and the fourth is in Shanksville, PA.

Carved from giant red cedar trees, the DC totem poles are quite striking. They represent Liberty and Freedom. Liberty is a female bear (or Mother Earth) over the Grandmother Moon and Freedom is a male bear (or Father Sky) over the Grandfather Sun. Connecting the two poles, the crossbar represents Sovereignty, flanked by eagles on each side, one representing peace and the other war. The eagles are each adorned with seven feathers, in homage to the plane that crashed into the Pentagon (flight AA 77).

A turtle stares piercingly at you from in the center of the crossbar, which didn’t have a specific meaning until the totem poles were placed in their current spot. The turtle is the symbol of Piscataway Tribe, whose homeland was along the Anacostia River.

The main carver was Jewel Praying Wolf James of the Lummi Nation, which is just outside Bellingham, Washington.

It’s always a fine time to stroll around the Congressional Cemetery, usually you will discover something new worth noting. 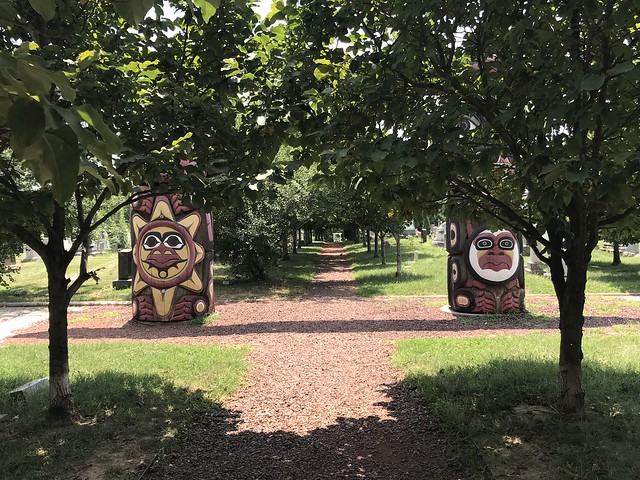 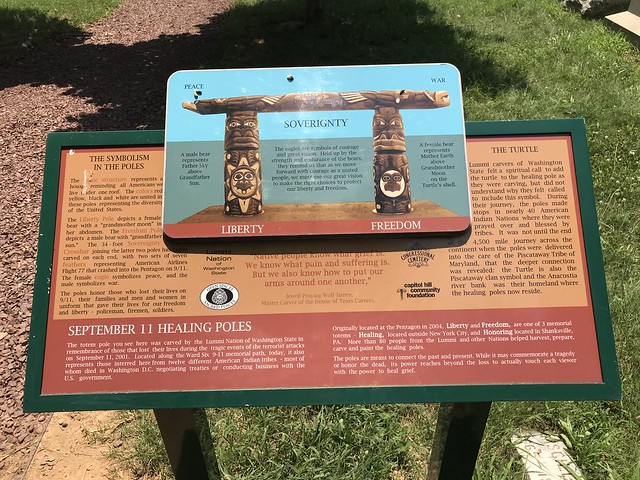