Within the Enid A. Haupt Garden (set between the Smithsonian’s Castle and the Freer|Sackler Gallery), rests the not quite secluded, but maybe you missed it, Moongate Garden. And it’s a fantastic little spot for a lunch or a sit.

The two entrances to DC’s Moongate Garden sit at opposite corners and are stone ‘gates’. Each gate is two stones with a circular shape cut out (representing the moon).

Once you’ve stepped through the circle, situated in the middle is a small pond with four walkways leading to a middle island.

A few benches are well placed next to the side of the Freer|Sackler building, giving ample opportunity for a pause to admire the view.

The Enid A. Haupt Garden itself opened in 1976, named after the donor who contributed enough money to make it a reality.

The garden is simply a great place to stroll about. Certainly one of the gems on The National Mall.

(Note: There is another moongate at the National Arboretum! Our journey will surely take us there!) 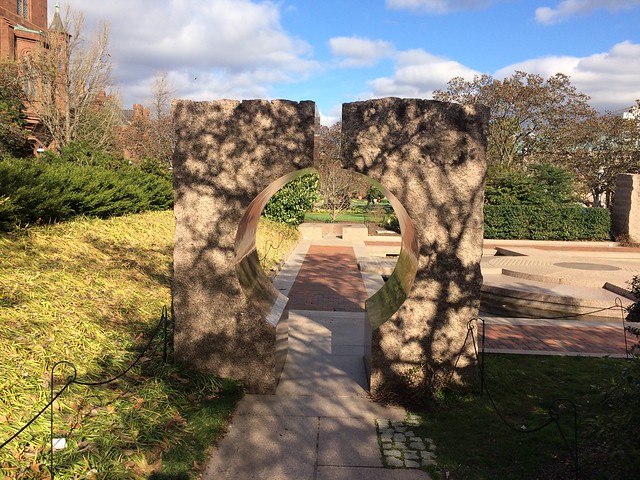