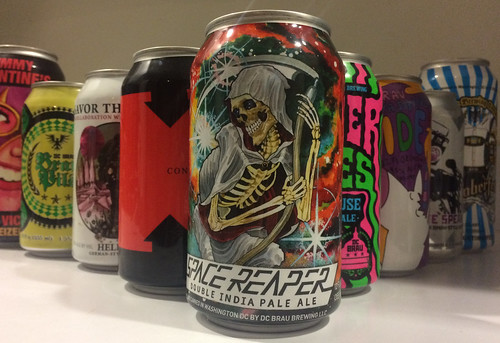 The Space Reaper is delicious, but I’m not sure about its attitude.

DC Brau’s Space Reaper (9.2% ABV) is an Imperial Double IPA that is as smooth, non-hoppy and pleasant to drink as an IPA can get. Even better than that.

My first sip came from a can, and I instantly regretted not buying more because now it’s only available on draft at DC Brau. The beer’s skeleton logo may scare some away, but it is still cool as hell (no pun intended).

I later did try the Space Reaper Nitro (9% ABV) on draft at DC Brau’s tasting room, and found the nitro version to be even smoother.

I will tell anyone that will listen (and have) that I’m not an IPA sort of guy. I like darker beers and less hoppy tasting styles. But I have found a number of IPAs that I enjoy, and it seems like most of them are the stronger imperial double IPAs. At least I feel much happier each time I have one. I doubt that has any influence.